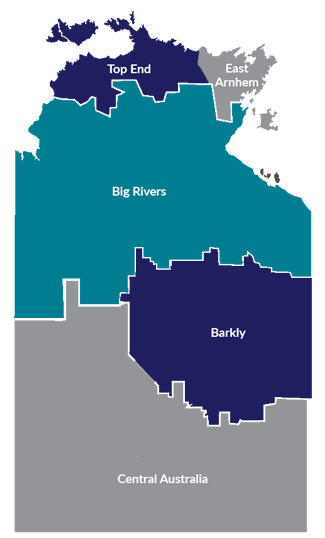 For all of us

How we are now in the strongest position ever to welcome back tourists.

The key deliverables the Territory Government has for health, education and investing in the prevention of domestic, family and sexual violence:

The Top End region encompasses Darwin, the Tiwi Islands and many small communities extending east to East Arnhem and south of the Palmerston and Litchfield region to the Katherine region.

Major industries include tourism, horticulture, forestry and mining. Tourism is a significant contributor to economic activity in the region, with world renowned attractions such as Litchfield and Kakadu national parks, as well as the Daly River for recreational fishing and camping. Mining activity in the region includes gold and other minerals around Pine Creek.

Big Rivers is the Territory’s second largest region and extends from the Ord Bonaparte area in the west to the Gulf of Carpentaria in the east. The Big Rivers region is made up of small communities separated by long distances. The town of Katherine is the main centre.

The town of Katherine is a natural transport crossway connecting Darwin and Alice Springs with Western Australia and Queensland. Recognising this strategic importance has enabled Katherine to develop as a major regional logistics and agribusiness hub.

Key tourist attractions include Nitmiluk Gorge, Leliyn (Edith Falls), Mataranka, and recreational fishing in the big rivers of the region.

Barkly is the Territory’s third largest region and extends along the Stuart Highway from Barrow Creek to Elliott and east across the Barkly Tableland to Queensland. The region is made up of small communities separated by long distances. Tennant Creek is the main centre.

Major industries include government services, agriculture, construction, and mining. The Barkly and Tennant Creek pastoral district accounts for a substantial proportion of the Territory’s total cattle industry. The Northern Gas Pipeline, connecting the Territory to the eastern gas market, is expected to stimulate economic activity in the Barkly region over the next few years. Government is also investing to develop Tennant Creek as a mining and mineral services centre.

The East Arnhem region is situated in the far north eastern corner of the Territory and covers East Arnhem Land, Groote Eylandt and Elcho Island. Due to the lack of road access, transport for travellers and freight is mainly by air or sea. Major population centres are Nhulunbuy and Alyangula.

Major industries in the East Arnhem region include mining, buffalo farming, tourism, aquaculture and fishing. Mining is the main contributor to economic activity in the region, with the production of manganese at the GEMCO mine at Groote Eylandt and bauxite at the Rio Tinto and Gulkula mines on the Gove Peninsula.

Central Australia is the Territory’s largest region, covering 42 per cent of the total land area. The region is made up of small communities separated by long distances. Alice Springs is the main centre in the region.

Major industries include tourism, mining, oil and gas exploration, and construction. Tourism is an important contributor to economic activity with many natural attractions in the region including Kata Tjuta, Kings Canyon, Uluru and the West MacDonnell Ranges attracting domestic and international visitors.