The value-adding activity of the mining and manufacturing sector is expected to recover over 2021-22 and 2022-23 as the Territory transitions from the pandemic, followed by a temporary drop over 2024 as the Darwin LNG plant transitions to a new source of gas.

In 2020-21, the mining and manufacturing sector contributed 24.1% to Territory GSP, the second highest contributing sector. On an industry-by-industry basis, the mining industry is the largest contributor to the Territory economy, accounting for 19.9% of GSP.

Mining and manufacturing employed 6,412 persons over 2020-21, accounting for 4.9% of total Territory employment.

Mining and manufacturing output is dominated by LNG and metallic minerals. Production from the Ichthys LNG plant is expected to remain broadly steady at 2020‑21 levels, whereas the Darwin LNG plant is expected to temporarily suspend production in 2024 as it transitions its source of gas from the depleting Bayu-Undan gas field to the Barossa field.

Global demand and prices for minerals are expected to recover over 2021-22 and 2022-23 as COVID‑19 becomes endemic and industrial production increases in line with consumer confidence. Energy demand will increase as a consequence, particularly low-carbon energy, as countries across the world ramp up their efforts to reduce greenhouse gas emissions. This includes demand for LNG, which is regarded as a transition fuel. Critical minerals are also vital for clean energy, encouraging projects that explore for and mine these minerals. This increased demand for LNG and critical minerals is likely to benefit the Territory, where a number of projects to evaluate the commercial viability of extracting these resources are underway.

Mining and manufacturing contributes to the Territory economy through international trade, private investment and employment. The mining industry also has a significant impact on the Territory’s construction industry, as mining development projects generally generate significant levels of construction activity.

There are a number of projects pending final approvals, which if realised, will boost mineral production in the Territory. These projects include:

Some of these commodities are listed as critical minerals, considered vital for the world’s economies, though with limited supply.

The majority of minerals produced in the Territory are metallic, including gold, manganese, zinc, lead and bauxite (Map 1). The Territory also produces non-metallic minerals, such as crushed rock, sand, quicklime and gravel.

The value of the Territory’s mineral output was $4.3 billion in 2020-21, a 2.7% decrease from the previous year in current prices, largely caused by a decrease in the value of manganese and bauxite produced (Chart 3). Globally, there was no clear trend in the price of most minerals over 2020-21, reflecting the patchy nature of economic recovery from the effects of COVID‑19 across different countries and over time as different variants of the virus emerged and spread. Gold prices remained high because of its status as a safe asset.

Manganese is an input to steel manufacturing and production is largely driven by global steel demand. In the Territory, manganese is produced at the Groote Eylandt Mining Company (GEMCO) mine, the largest manganese mine in the world, and previously at Bootu Creek near Tennant Creek (Map 1).

In 2020-21, the value of manganese produced declined by 9% (Chart 3), caused by a decline in the global price for the commodity. Manganese accounted for 34.2% of the value of all minerals produced by the Territory, the highest for any mineral.

Manganese prices are expected to increase slightly over 2021-22 and 2022-23 with an expected increase in global steel demand. With demand high, the GEMCO mine is expected to operate at capacity. Mining at Bootu Creek ceased in December quarter 2021 due to a drop in ore grade. The option of reprocessing the tailing dams to extract manganese fines is being assessed.

Gold is produced at the Granites mine in the Tanami region and Mount Tymn mine, just south of Adelaide River (Map 1). The value of gold produced was unchanged in 2020-21 relative to the previous year, accounting for 27.8% of the value of all minerals produced by the Territory. While the quantity of gold produced decreased by 6.7% in 2020-21, it was offset by an increase in the price of gold.

With strong gold prices a number of gold mines in the Territory are proposing to open or reopen including Mount Todd and the Mount Bundy project.

Zinc and lead are produced at the McArthur River mine located 65 kilometres south-west of Borroloola (Map 1). The value of zinc and lead produced increased by 14.2% to $907.3 million in 2020-21 due to an increase in price and quantity produced.

Demand and prices for zinc and lead are expected to remain steady over 2021-22, increasing slightly over 2022-23.

Two bauxite mines operate in the Territory – Rio Tinto’s mine at Gove and Gulkula’s mine on the Dhupuma Plateau (Map 1). The Gulkula mine project agreement was signed by Rio Tinto and Gumatj Corporation in August 2017, becoming the first Aboriginal-owned mining company operating on traditional land. Bauxite from this small-scale mine is sold to Rio Tinto.

In 2020-21, the value of iron ore produced in the Territory was $73.7 million, the first since the Territory last produced or sold ore in 2015-16. Favourable prices, caused by increasing demand for the ore from China and elsewhere as the world recovers from the effects of COVID-19, has encouraged mining activity in the Territory. Nathan River mine reopened in October 2020 and immediately commenced production and export. The Frances Creek mine (Map 1) also processed some low grade stockpiles and exported 1 shipment in June 2021.

The Nathan River mine ceased operations in October 2021 following a drop in iron ore prices. The Peko mine in Tennant Creek (Map 1) reopened in the second half of 2021, and production is scheduled for the first half of 2022. The mine is expected to expand production over its 5 to 7 year life.

With a return to favourable prices in early 2022, a number of iron ore mines are proposing to open in the second half of 2022, including the Warrego mine in Tennant Creek, the Frances Creek mine in Pine Creek and the Roper Valley mine (Map 1).

Lithium is an important mineral for the production of lithium‑ion batteries which are used in a range of electronic devices such as mobile phones and laptops, and larger scale energy storage systems and electric vehicles. As such, lithium is crucial in the transition to net zero carbon emissions, and global demand for electric vehicles and battery systems will remain strong over the outlook period.

Construction on the Finniss lithium project commenced in late 2021, with first production expected in late 2022. This new mine is presently expected to be productive for about 7 years. In March 2022, Core Lithium, the mine owners, signed an agreement to supply Tesla with lithium from 2023.

Spot prices for uranium have been rising since the second half of 2020 and are expected to continue increasing over the next few years. The closure of 2 major overseas uranium mines and a growing number of nuclear reactors restarting since the Fukushima disaster has increased mineral demand and prices.

Energy Resources of Australia Limited’s rehabilitation of the Ranger mine site has commenced. Jabiru, the township built to service the mine which has doubled as a key service point for the surrounding Kakadu National Park, is transitioning to a tourism and regional service hub following the release of a masterplan for the town in mid 2018. The plan includes investment in essential services and infrastructure, including a hybrid diesel and solar power station, which commenced operation in January 2022.

The value of production of non-metallic minerals declined by 9.6% to $40.6 million in 2020-21. There were declines in the value of dimension stone, gravel, garnet sand, mineral specimens, quicklime, sand and soil, and increases in the value of crushed rock and limestone.

Most non-metallic mineral production is for Territory consumption and responsive to changes in construction activity. Production is expected to grow over the outlook period with the construction of the Darwin Education and Community Precinct, ship lift and defence projects.

Map 1: Current and pending mineral and onshore petroleum operations in the Territory1 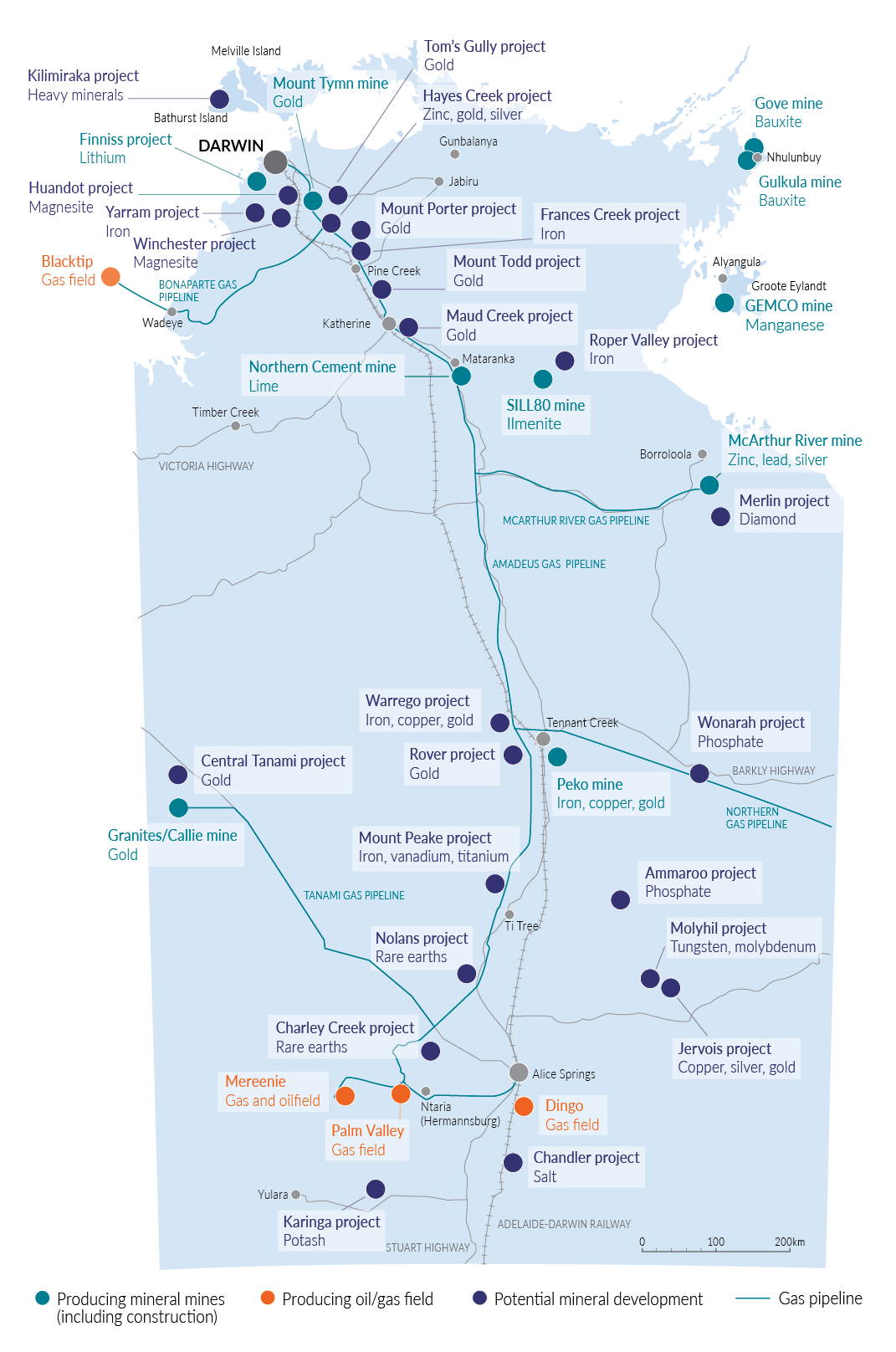 Presently all the Territory’s onshore oil and gas production is conventional in nature, sourced from the Amadeus Basin in Central Australia. Gas production occurs at the Mereenie, Palm Valley and Dingo fields, and the Mereenie field also produces oil. Central Petroleum Limited operates all these fields. The Dingo gas field supplies gas directly to the Owen Springs power station in Alice Springs.

There are a number of offshore reserves that supply gas to onshore facilities in the Top End (Map 2) for further processing or use. Current offshore gas production is from the Bayu-Undan gas field in Timor‑Leste’s waters, and the Blacktip and Ichthys gas fields in Western Australian waters. 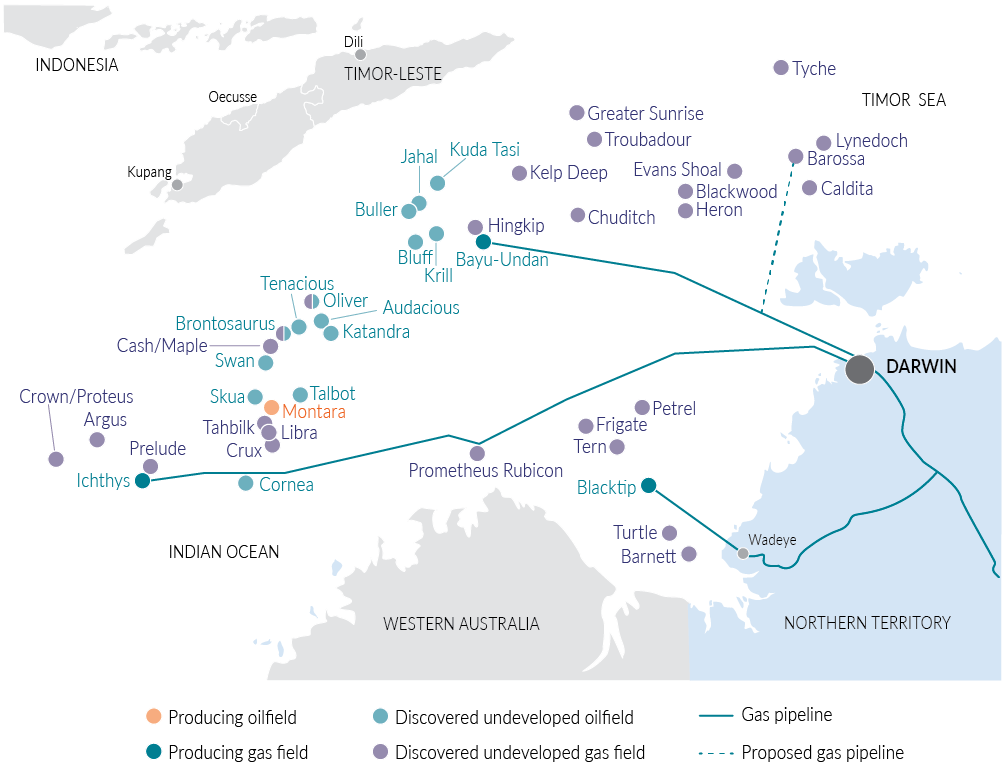 Offshore oil production attributed to the Territory in 2020-21 was primarily from the Montara field, following production ceasing at the Laminaria-Corallina field in July 2019. Oil produced offshore is exported overseas. The value of the Territory’s offshore oil exports rose from $5.1 million in 2019-20 to $47.7 million in 2020-21. Caution is advised when interpreting this result as a large proportion of trade data has been confidentialised by the Australian Bureau of Statistics (ABS).

The Ichthys LNG plant commenced exports in late 2018 and reached peak production in 2019-20. The 2019-20 production levels are expected to be maintained going forward.

Exploration does not always lead to the development of new mines, but levels of exploration activity can be a lead indicator of potential future development.

Chart 4: Value of mineral exploration expenditure in the Territory1 Petroleum exploration expenditure in the Territory increased by 61% to $170.8 million in 2021, with the onshore gas exploration in the Beetaloo basin resuming (see below for more information).

Significant increases in mineral and petroleum exploration in 2021 signal an end to temporary pauses in exploration activity because of COVID-19. Exploration has been facilitated by the continuing support of the Territory and Commonwealth governments (see Territory Economic Reconstruction Commission section below).

Unconventional gas in the Territory

Following a temporary pause in exploration activities through 2020 due to COVID-19, gas exploration in the Beetaloo basin is ongoing, with miners drilling test wells to assess the commercial viability of the resource. The Beetaloo basin is the first of 5 strategic basins prioritised through funding from the Commonwealth to support recovery from COVID-19.

These exploration activities have also attracted the attention of several gas pipeline companies proposing projects to carry the gas to market.

At this stage, gas production in the Territory is not expected before 2025-26, and is therefore not reflected in the budget economic forecasts.

The value-adding activity of the Territory’s manufacturing industry increased slightly by 0.4% to $993 million in real terms in 2020-21, but is lower than the $1.1 billion recorded in 2018-19, in part reflecting the persistence of weaker demand caused by COVID-19.

The Territory Government is also investing $10 million in a joint venture to manufacture the amphibious Albatross aircraft at Darwin airport, with production expected to commence in 2025.

Progress towards meeting the Territory Economic Reconstruction commission’s recommendation to advance gas and renewables-based manufacturing in the Territory is presented in the next section.

Government is undertaking a range of actions relevant to mining, manufacturing, and energy transition and decarbonisation including:

For the latest data on the Territory’s mining and manufacturing sector, refer to the Territory Economy website.