Defence investment in the Territory is expected to increase over the outlook period as a result of increased geopolitical uncertainty and the Top End’s important strategic location in the Indo‑Pacific region.

The 2016 Defence White Paper and associated Integrated Investment Plan reinforced the growing strategic importance of the Territory to Australia’s defence and regional stability. As the country’s northernmost jurisdiction, the Territory will always be integral to the operational capability of the Australian Defence Force (ADF), Australia’s military allies and partners, and regional neighbours.

Responding to geopolitical tensions in the Indo‑Pacific, the Commonwealth released the 2020 Defence Strategic Update. This presents further opportunities for the Territory to play an even bigger role in supporting Australia’s future defence capabilities that are critical to respond to evolving regional and global challenges. Alongside this are the associated investments in infrastructure, operational support, maintenance and technologies for equipment, and forces based in and deployed from the Territory.

The reinvigoration of the Quadrilateral Security Dialogue and the establishment of the Australia, United Kingdom (UK) and US agreement has seen a significant increase in the attention and resources of Australia and its allies into the Indo-Pacific. This is likely to generate a level of involvement by the Territory.

As a sparsely populated yet geographically large jurisdiction, defence personnel and operational decisions have a direct impact on the Territory’s economy. Associated supply and maintenance activity supports local businesses and industry development, and relocating families contribute to population growth and increased demand for goods and services.

Defence training exercises with international partners, and deploying allied personnel and equipment to the Territory also brings additional revenue that extends beyond defence‑related industries to reach a wide range of local industries including the hospitality, retail and tourism sectors.

The capability of the local defence service and supply industry, including the industrial infrastructure essential to this capability, continues to strengthen, expand and modernise the ongoing and future defence and national security requirements of Australia and the region.

Chart 8: Defence expenditure in the Territory Chart 9: Defence employment in the Territory The number of Defence Housing Australia properties in the Territory decreased by 1.5% to 1,746 in 2020-21, continuing the downward trend from a peak of 2,638 in 2013-14. The Territory’s proportion of total defence housing stock decreased by 0.6 percentage points to 9.2%. Defence Housing Australia is in the process of developing 131 hectares at Lee Point to produce 778 development lots in a mixed residential and retail community, with titling expected by June 2022. Between 20% and 50% of residential properties will be allocated to defence personnel.

Australia maintains international cooperation with a range of defence partners. Together with its main defence partner, the US, Australia participates in the United States Force Posture Initiatives (USFPI). The 10th anniversary of USFPI was held in 2021 and included the Marine Rotational Force – Darwin (MRF-D) of up to 2,500 US personnel, training throughout the Territory. In addition to the MRF-D, the Enhanced Air Cooperation element of the USFPI strives to strengthen the air cooperation between the 2 allies with air assets and personnel rotated through the Territory.

The US also sees strategic value in the Territory due to its location in the Indo‑Pacific region. Therefore, it has partnered with Australia to improve infrastructure in the Territory to better secure its interest. As part of the Enhanced Air Cooperation, the US is upgrading infrastructure to support increased rotations of air and sea assets. One of these projects is the $270 million bulk fuel storage facility to provide storage of 300 million litres of aviation-grade JP-5 turbine fuel and commercial grade Jet A-1 fuel in Darwin.

Australia regularly engages in military exercises with its defence allies to foster closer relations and upskill defence personnel. Due to its location in the Indo-Pacific, the Territory frequently hosts exercises with different international partners.

In 2021, these exercises included:

The Territory is home to 2 large biennial defence exercises: an international maritime engagement exercise, Exercise Kakadu, and an international air combat exercise, Exercise Pitch Black. These exercises bring together numerous defence partners ranging from the US and UK to Malaysia and Singapore. Both exercises will be held in 2022, with Exercise Pitch Black to take place from 19 August to 8 September 2022 and Exercise Kakadu to follow on throughout September.

Besides military exercises, Australia’s defence partners are welcomed in Darwin and regional port facilities to enable resupply, as was the case when Japanese vessels JS Kaga and JS Murasame docked in Darwin after exercises with India and the US in September 2021.

The engagement with international partners reaches a wide range of local industries including the hospitality, retail and tourism sectors.

Since 2016, the Territory economy has benefited greatly from an increase in Defence investment. The Commonwealth is in the midst of an $8 billion major infrastructure investment commitment through to 2025, and a further $12 billion is earmarked for 2026 to 2035, pending parliamentary approvals. Local industry capability plans and Indigenous procurement targets set by the Department of Defence have seen an uptake in Territory businesses, including Indigenous Business Enterprises, winning work across defence programs and projects since 2016. Nationwide, local industry participation in defence infrastructure projects is sitting at 75%. In the Territory, it is achieving 82% participation (as at late 2021).

Defence tenders offer the incentive for large international firms to invest in the Territory. These international firms bring with them expertise that can be skill shared across the Territory. Defence, by fostering links between international and local firms, allows for networking in the future or provides the opportunity to integrate into the global supply chain. For example, Territory companies (Fuel Calibration Services, Territory Instruments, RAM Services and RGM Maintenance) are subcontracted by Lockheed Martin to provide ground support equipment capability.

Projects under development across various facilities in the Territory include (Map 3):

Projects proposed and subject to approval:

In December 2021, RAAF Base Tindal accepted the first delivery of 4 F-35s that will operate from the base. The delivery of the F-35s followed the construction of new facilities at RAAF Base Tindal needed to store and operate the jets. The posting of the F-35 is integral to the ADF's plans for northern Australia and brings Lockheed Martin to the Territory to support aircraft maintenance at the base.

The Darwin ship lift project provides sovereign infrastructure which will enable the Regional Maintenance Centre North to conduct maintenance and sustainment to support the Royal Australian Navy’s fleet of vessels. 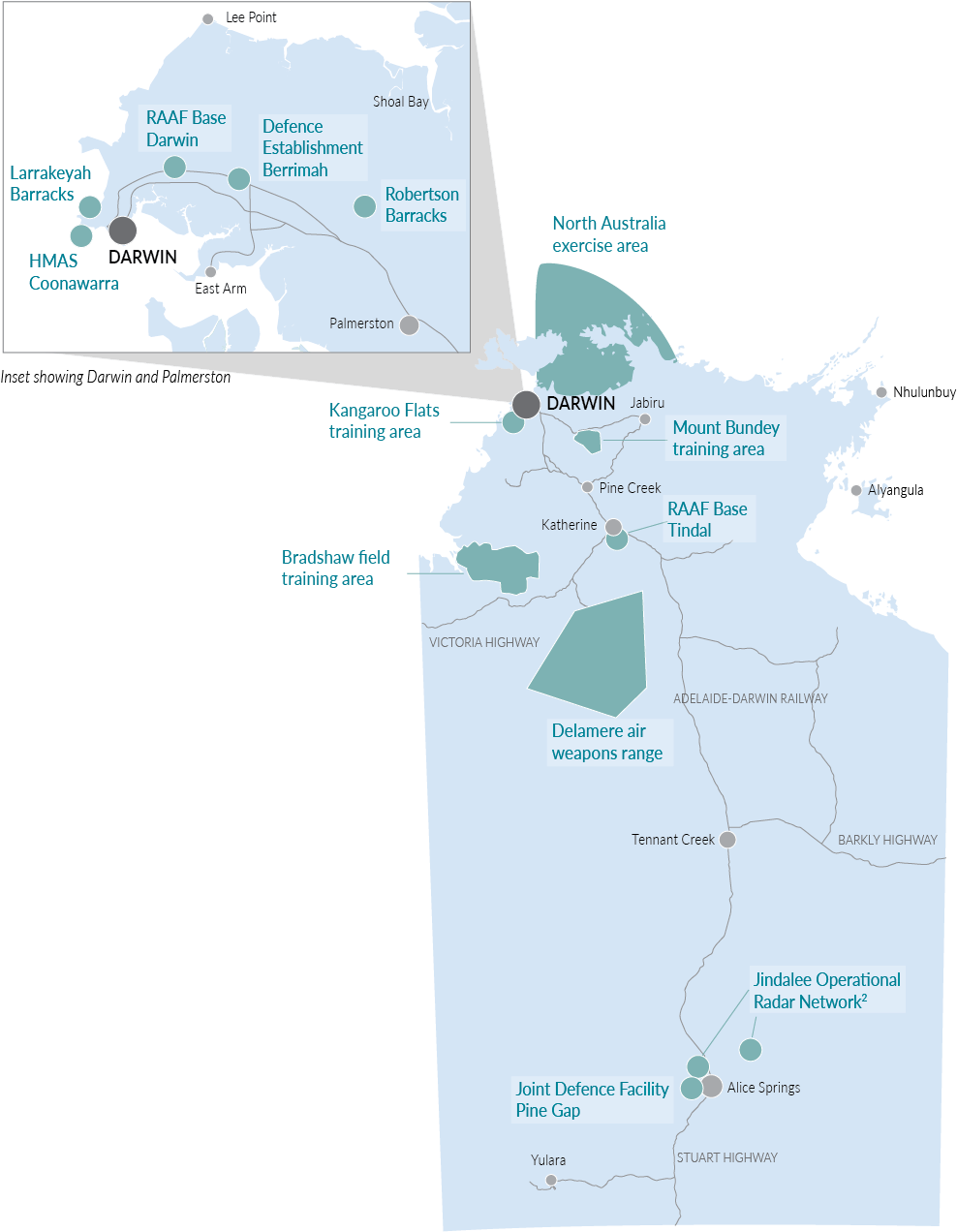